A Light in Myanmar

When asked to write something for this blog about the time I spent in Myanmar last summer, I excitedly opened my notebook to begin writing about all the many things I observed when I was there.  Unfortunately, staring at a blank page with a pen in hand was about as far as I got for several weeks.  Every time I sat down to write, I found myself experiencing writer’s block (of sorts). How do I write about a country that is full of contradictions?  How do I talk about a country full of people who have touched me so deeply that it feels like I am exposing my heart to everyone who reads this blog post? I suppose, though, that to love is to be vulnerable (to quote the brilliant C.S. Lewis), and I will just have to be brave and share with all of you my love for this country. 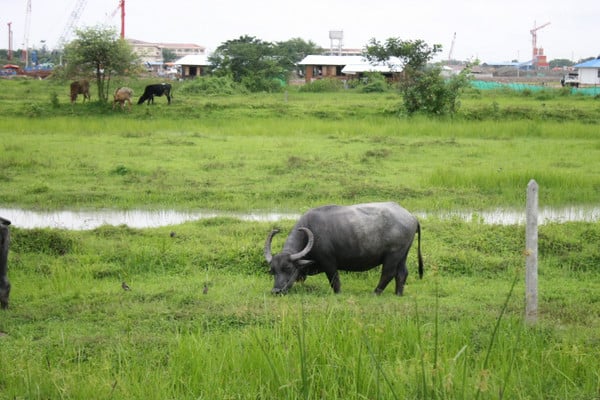 Water Buffalo in the countryside

Upon arriving in Myanmar with the LFM team in July of last summer, I was shocked by the intensity of the drivers on the road.  I’ve experienced crazy driving before, but I have never had a taxi driver tell you NOT to put a seatbelt on, or countdown, “Three… Two… One… GO!” at a red light waiting for it to turn green, like a Nascar race.  The first time I tried to cross the road when adventuring around Yangon with the other youth, I didn’t realize initially that cars don’t actually stop (or slow down!) for pedestrians, crosswalk or not.  I figured it out pretty quickly, though.  Suddenly, “walking” across the road turned into “running-for-my-life” across the road.  Talk about an adrenaline rush.  Oddly enough, there is a huge difference between the demeanor of the people of Myanmar when they are on the road, versus off the road.  The shopkeepers and street vendors that we encountered while exploring the city were all very warm and friendly, smiling or waving in greeting when we would walk past their shops. The people that we passed on the street were the same way–unafraid to make eye contact, entertained when we attempted to greet them in Burmese, willing to pause what they were doing to acknowledge our presence. There was even a group of middle-aged men who called out to us because they wanted to show one of the guys from our team how to correctly tie his longyi (traditional Myanmar outfit).  When we bought watches from a street vendor, the shopkeeper spent a good portion of time meticulously sizing the watches for us until they were just right.  Do you see the contradiction?  Kind, friendly people in person; chaotic, brisk, and impatient drivers on the road. 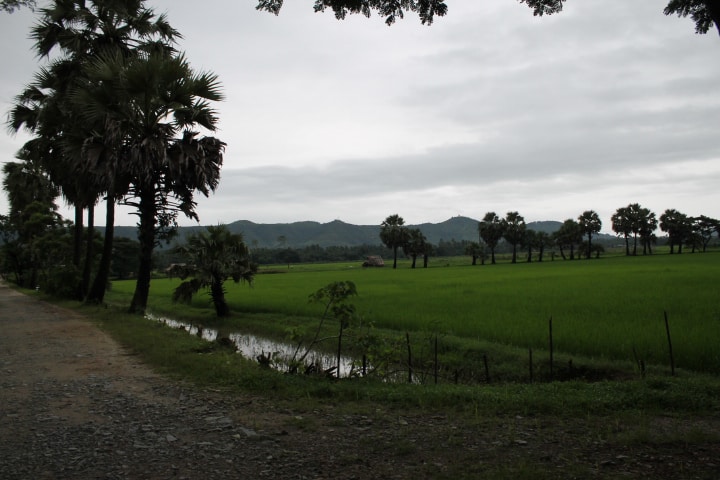 The beautiful green landscape of the country

The landscape of Myanmar is absolutely stunning.  Although, I only had the opportunity to visit a small portion of this almost-Texas-sized country, the places that I did get to see were incredibly beautiful.  From the leaves on the acacia trees, to the rice patties that can be seen in any direction, to the grass and moss and shrubs that cover everything in between, I think that every possible shade of green could be found in just one picture of the Myanmar countryside.  For a Texas girl who is more familiar with all the many shades of brown, dead grass, the vibrancy of a rainforest that is teeming with green, living things is really quite something to see.  This country, with its innate beauty, does have a flaw, though: the ungodly amount of rubbish that can be seen nearly everywhere you look.  The following is something I wrote down one morning while on the trip:
“I’m sitting on the dock of the bay, looking at the green hills and golden pagodas on the opposite shorelines around me that are so beautiful and surrounded by mist in the sunrise and clouds, and what ruins this picture from merely three feet below where I sit?  TRASH.  Awful-smelling trash.  Rotting bananas and soggy bamboo and old rice and used styrofoam to-go boxes and worn-out shoes and just trash, trash, trash, that serves as food for the giant river rats and mangy dogs that I can see shuffling through the waste.”

It broke my heart again and again while on the trip to see such a gorgeous country full of natural resources being polluted by trash and waste that is being dumped into bodies of water or burned outside of homes and businesses. 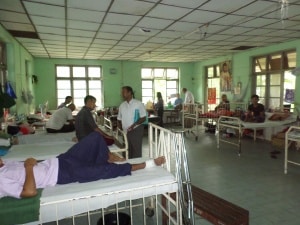 Inside the Leprosy Hospital

Here’s a topic that I didn’t know much about before going to Myanmar: leprosy.  All that I knew of leprosy was it was very prevalent during the time Jesus walked the earth, as the Bible makes mention of Him healing lepers during His ministry.  I thought leprosy had been eradicated, but this trip proved me otherwise.  Almost all of the LFM team members, myself included, had the blessing of visiting the Christian Leprosy Hospital of Mawlamyine, in the Mon state.  We hugged and loved on as many of them as we could.  Many of the people that we met had only stubs for fingers, or no hands at all.  Others were blind, others in wheelchairs because the leprosy had left them without feet.  Although, the majority of the 300 or so patients at the hospital are afflicted with leprosy, there are others who are being treated for other ailments, like the woman I met who was admitted for treatment of a skin disease.  This disease caused her skin to peel off in large sections all over her body, including her face, neck, and hands, exposing the tender, red tissue underneath.  Not only was she experiencing incredible physical pain due to her condition, she was suffering emotionally as well.  She spoke very softly, in a monotone voice about how her family had rejected and abandoned her because of her disease.  Even though she had stated that she was a Muslim, and knew that we were Christians, she readily agreed when my interpreter, Aunty Rosy, asked if we could pray for her.  After we finished praying, I opened my eyes to find tears pouring down the woman’s face.  Oh, how desperately she needs the peace that passes understanding that God promises to His children.  That woman is one true story of a human life who is impoverished, in more ways than one.  I once heard someone speak of eight forms of poverty.  There is poverty of spirit, poverty of intellect, poverty of affection, poverty of the will, physical poverty, poverty of a support network, poverty of civic involvement, and economic poverty.  Being there at the leprosy hospital was the first time I had seen all eight of those forms of poverty.  You may think it was a dreadful experience, going to the leprosy hospital, but for me, it was a highlight of the trip.  It was incredible to see the way the faces of those with whom we visited light up with joy in those few, brief moments of human interaction.  Just think of how those lives could be changed if only they were filled with the eternal hope and joy that comes from knowing Christ! 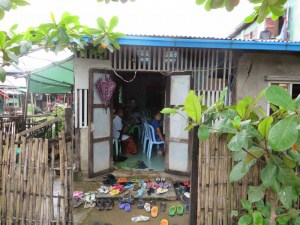 A home church in myanmar

We had a chance to attend a small home church in Yangon one of the Sundays that we were in Myanmar.  This experience was the opposite of what we saw at the leprosy hospital.  The church congregation meets in a small, two-room building–one large, empty room, and a small kitchen.  The building is not only a family home but also a school during the weekdays, and a church on Sundays.  Although Christianity is recognized by the government in Myanmar as a protected religion, the believers there still face persecution from people in other religions within the country.  Christians in Myanmar are facing violence, imprisonment, forced labor, and discrimination.  Many Christian villages have been burned to the ground over the last decade.  A passage of scripture that kept repeating itself in my head while in Myanmar was Ephesians 6, where Paul talks about the armor of God.  He states that our battle is not against flesh and blood, but against the spiritual forces of evil in the heavenly places.  The Christians who are in Myanmar have to fight this battle daily.  I do believe, though, that it is because of those struggles that the believers under persecution have such a strong faith.  They are able to see again and again God’s faithfulness to them.  I wish I had a way to let each one of you witness what I saw at that home church in Myanmar.  I glanced around at the believers surrounding me as they sang “As The Deer” in Burmese and it brought tears to my eyes to see them singing these lyrics with such sincere hearts: “You alone are my strength, my shield, to You alone may my spirit yield.”  Yielding to none other than God takes on a whole new level of meaning when faced with persecution from those surrounding you, including neighbors, military, employers, and schoolteachers.

Just like with any relationship, the more you get to know someone, you may enjoy their personality, character, and quirks, but the more you will also see their flaws and shortcomings.  Myanmar is the same way.  It is a country full of beauty, and a country full of darkness.  In my mind, I see Myanmar as a country that has been covered with darkness, but those who follow Christ are now light in the Lord! There are little flickers of light all over the country, and the light is hope.  “The light shines in the darkness, and the darkness has not overcome it.”  -John 1:5- Although, my heart breaks over the sickness, poverty, and oppression that can be seen in Myanmar, I deeply love this country that God has created and the beautiful people that live there.  I know that the Love For Myanmar team feels the same way, and I hope that you have been able to see a glimpse of that.