Early one Monday morning in 2004, our housekeeper’s husband knocked on the door and told us the night before she had suffered a heart attack. She was in the government hospital and could we please help. Their ten-year-old son stood behind him with eyes brimming with tears. Most Burmese go to the government hospital because you only pay for your medicine, not the room. We loaded the van and set off for the hospital.

The hospital was an aging cinder block building originally painted white, but now gray with mildew. We walked past several large grimy rooms that looked like the emergency wards you might see in a World War II movie. Patients filled rooms, moaning on rusty iron beds outfitted with plywood and bamboo mats. Fluorescent lights hung from the ceiling with spider-webs, but only one worked. Ceiling fans were still, wings broken and never repaired. Antiquated IVs, catheters, and gauze bandages were common. The room smelled of alcohol, body odor, decaying flowers, and left-over food families brought from home, so the patients could eat. The woman in a corner bed was in a coma.

You could tell that most of the patients thought they were going to die. A group of doctors “made the rounds” stopping by each bed, checking, conferring, prescribing, then moving to the next patient. We waited and watched them visit twenty-five
patients before it was our housekeeper’s turn.

Their diagnosis…she had suffered an asthma attack. Medical education is so poor that many times the Burmese people have no idea what is happening to them. Our housekeeper returned to work a week later fortunate…at least Yangon has hospitals.

The villages of Mon people in Myanmar contain few medical clinics if any at all. Please pray with us about the medical needs of the Mon people. Part of our ministry connects Mon people with volunteer medical teams from the United States. Pray with us that God will raise up a network of doctors and nurses who give their vacation time to minister to the Mon.

We know that hurting children are safe in His arms. May the healing touch of Jesus draw the hearts of the Mon people to the cross of Christ and everlasting salvation. 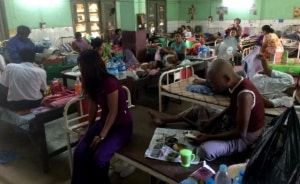