Our guest blogger this week is Julie Christianson. Julie travelled with Love For Myanmar to Myanmar in the summer of 2013. She has many stories from her time there, but this is one of our favorites. Small acts of kindness and faithful service can move mountains….or save babies. If you would like to learn how you could help children like Esther, please contact us! You can find us on facebook or at www.loveformyanmar.org.

On our mission trip to Myanmar last summer, our final stop was in a remote village near Ngwe Saung (The Silver Beach). We traveled by dump truck along the beautiful coastline and through the dense jungle on what turned out to be quite an adventurous trip.  When we stopped in front of the simple little church the curious villagers greeted us warmly. They ushered us inside to find a seat in the pews.  We were guided up to the front row and pulled into seats by some sweet little ladies.  The service began with worship promptly, but we were distracted by the labored breathing of an adorable baby nestled in her mother’s arms behind us.  She was clearly struggling to breathe and had very low muscle tone, seeming unable to even hold up her little head.  My daughter, Brianne, couldn’t focus on what was taking place in the church service because she was so concerned about the sick baby.  She asked if her inhaler could possibly help the child breathe.  I was unsure and we both realized she wouldn’t be able to use the inhaler herself after that because we had no clue what was causing the child’s respiratory distress.  I spoke with Sherry Crockett, who is a pharmacist and we met at the back of the church with the young mother and child.  The pastor of the small church translated for us and we prayed for the baby. Then, Sherry made a funnel from construction paper that covered the baby’s nose and mouth so that the medication would not escape.  After receiving a couple of puffs from the inhaler, the breathing seemed to ease a bit, but clearly there were issues that ran deeper.  When we offered an invitation at the end of the service, the mother came forward and I was able to pray over her again while tears streamed down both of our faces.  However, in the midst of interacting with many of the visitors after the service, they seemed to disappear without us finding out much more about them.

Weeks went by and we couldn’t shake the image of that struggling child and desperate, exhausted mother holding her.  We continued to pray for them, but wanted to do more.  We contacted Love For Myanmar and asked them to try to track down the infant and send the mother and child to a doctor to see if anything could be done.  At the very least, we wanted to get her something that she could place the baby in so that her hands could be free to do her work.  We found out the baby was a little over a year and a half old and named Esther. Most of the people we encountered in Myanmar had names that were hard to pronounce or just sounded funny to us.  But, this baby was named Esther.  In one part of my first prayer, I had prayed that God would use this little child to draw people in this village to himself and that he would be glorified through “his” little life.  I even mentioned in my prayer, that with Christianity also being in it’s “infancy” in this village that perhaps, this child “was born for such a time as this”. When I found out the baby was a girl and her name was Esther, I was amazed!  After visiting a doctor and then a specialist the mother was given a set of exercises to go through to strengthen Esther’s muscles. Then, she was given a baby activity/exerciser to allow the mom to have her hands free to be able to accomplish more and allow the baby to gain even more muscle control.  The letter and pictures sent back to us showed Za Za Htay (the mother) no longer sad, but clearly thrilled with this small token of kindness and baby Esther grinning from ear to ear!  The picture says it all.  God gave us the greatest gift in allowing us to see that little girl smile. 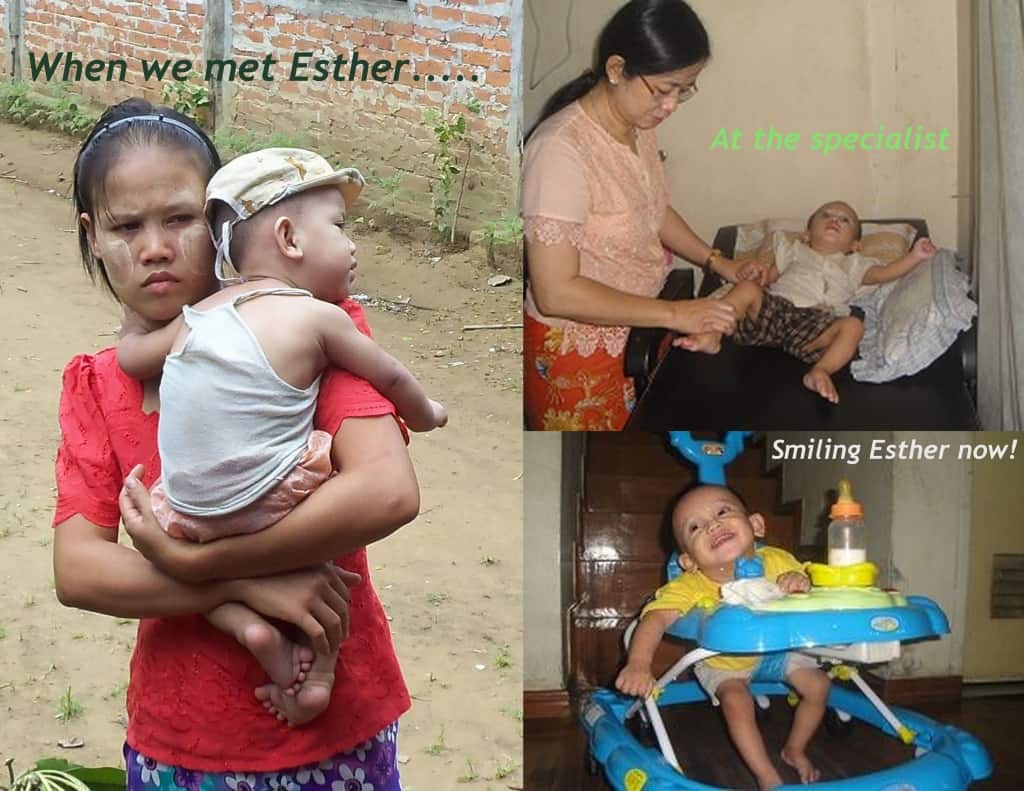