The following story may seem like an urban legend, but it is not.  It has been verified by reliable sources and represents a window into the superstitious, dark side of life in Myanmar….

Many people in Myanmar believe that a spirit must guard their house, or business, or a public place.  Usually, this amounts to constructing a spirit house, or its equivalent, and giving daily offerings of food and drink to appease the spirits.  In the case of a bridge, however, it is different.  At the completion of the project, someone is sent out to find a human sacrifice.  If they do not find their quarry, they themselves are taken.  The victim is beheaded with the belief that this will cause their spirit to always remain at the bridge, guarding and protecting all those who pass over.  Currently, the government of Myanmar has hundreds of bridges under construction.

The story goes a stranger entered a village and struck up a warm conversation with a young family.  The wife was at the point of birth and her husband asked the outsider to stay with her while he ran to the doctor to get help.  When he returned, mother and child were gone.  Frantically searching, he found them both underneath a recently completed bridge near the village.  Both had been decapitated.  Locals believe mother and child haunt the bridge and watch over it.  Neither probably received a funeral because Buddhists believe the mother and her child were being punished by karma for some heinous crime they had committed in a previous life. 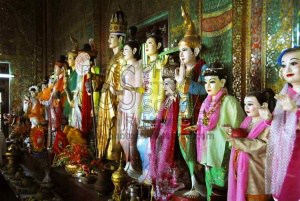 Very aware of a spiritual world, the Burmese are willing to go to any length to protect themselves from evil spirits.  Most have never heard that One gave his life so that they could be free from the shackles of the Hater.  One has crushed the power of death and offers undying life to all those who will trust in Him.  Truly, it is Christ and not karma that rules over this world and holds all creation together, but they do not know and have not heard.  Pray that many will join us as we share the Good News and that countless Burmese will believe and receive the glory of God.  Pray that the things done in darkness will be exposed in the light and, as a result, many Burmese will turn to One who can save them forever.