We are delighted to share with you a recent mission team participant’s experience of his trip in his own words.  Meet 2015 Team Member Charly Skaggs

Matthew 5: 15-16
15. nor does anyone light a lamp and put it under a basket, but on the lamp stand, and it gives light to all who are in the house. 16 “Let your light shine before men in such a way that they may see your good works, and glorify your Father who is in heaven.

May my experiences and stories allow you to see good works, feel a real part of the experiences, support  Love For Myanmar and glorify our Father who is in heaven. 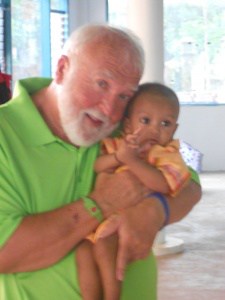 My story begins with God’s voice speaking to my heart and telling me to “Just say yes.”  So, I have been trying to do just say yes.  Therefore, when the announcement was made that there would be a meeting for those interested in going to Myanmar; I had to “just say yes!”

Since that time, people have asked me, “What did you learn from your trip to Myanmar?”  I found it difficult to come up with an answer.  The more I thought about it, I realised, it was not what I learned, however it was what God allowed me to experience with Him while on this unique trip.

There were several defining moments that God spoke to me during our time in Myanmar. As it happens, it was at the Leprosy Hospital where some of my greatest experiences occurred.

This is one of those experiences.

On the way to the Leprosy Hospital, it became clear that Satan did not want me going there.  Those little thoughts began to pop into my head on the bus ride to the hospital.  You know those thoughts; “You don’t need to go to this hospital, what if you get leprosy, you don’t have anything to offer these people, you don’t need to do this, just go back to the hotel, you really have no business going to this place”.  I knew these were not my thoughts because I had been very excited about this part of our trip since it was announced we would be going to the hospital.  So, I simply asked God to remove these thoughts that were bombarding my mind.  Of course, at the name of Jesus, He did remove them and replaced them with a sense of positive expectations.

Upon arriving, the room was set up with chairs and people began to fill the room.  Some needed help with wheelchairs, some help with homemade rolling pads.  Cracks in the sidewalk made it difficult for them to maneuver to get to the room and to enter this open-air hall.  We helped and greeted those coming to the program that day.

The room filled and Reed began to talk to the group about Love for Myanmar, where we were from, and the goals for our trip.  I was told I would be telling the stories from the book of Daniel.  I had just finished up with Camp Crestview, so these stories were fresh on my mind. (Coincidence? I think not!)

As I sat, waiting for my story time to begin, God’s spirit began to impress on my heart that I should share the story of my life living with the disease of haemophilia.  The thought seemed odd to me, however, the impression was strong.  I approached Gary Watkins, one of our trip leaders and told him I thought I was supposed to share my story about being a haemophiliac with the group.  He said something like, “Of course you should.  It would be perfect. “

I returned to the little wooden bench (Figure 1) and began to wonder what I would say and how these special people would respond.

Well, I was introduced and through a wonderful interpreter, Gilbert David, told the story of Daniel and his obedience to God’s word in not eating the king’s food, his friends not bowing down to the idol of the king, being thrown into the fire, and Daniel continuing to pray to God in spite of the King’s order that no one would be allowed to pray to any other Gods expect the king.

When I finished this story, God’s spirit began to lead me into the next story about my life.  I began by saying that I was born with a disease that you can’t really see, except at certain times.  The disease is called hemophilia and it makes my blood very difficult to clot.  I rolled up my sleeve to display a huge bruise that I had on my upper arm.  Showing them that there were times you could see my disease, but the disease’s impact was not always visible.  God’s spirit said a lot during those minutes and I really cannot recall what was said.  However, I do know it was God’s spirit speaking and I do recall sharing my experiences as a child.

Starting when I was very young, and more pronounced when I started school, teachers would make me stand before the class and tell my fellow students that “Charles has a disease and you should not touch him!” I can remember children telling other children “Don’t touch him. He has a disease.”  Even if there was a scuffle, my friends would say I shouldn’t be part because I might bleed.

Growing up I played basketball, tennis, track, water skied and did my best to make sure no one could tell I had hemophilia by looking at me.  I explained that I spent a lot of my life in bed or in a hospital because I had injured myself and was bleeding internally.

I shared that people even questioned the sensibility of my going to Myanmar where health care was not going to be able to do much for me if I was sprained an ankle and hemorrhaged or was injured in some other way.  Still, I knew I was suppose to go on this trip and like all my sixty-four years did not let being a hemophiliac become a reason for not to do things that I felt I was supposed to do or needed to do.

It appears God used my life as a hemophiliac to touch the lives of those who were living with leprosy.  Maybe it is the way people think of them or how they have been treated in their life living with leprosy.  Regardless, God touched their hearts with my story.  Women and men cried as God spoke using me and the life with the disease of hemophilia. What many would see as a curse became a blessing that day.

Never in my life would I have thought that my disease would be touching my heart and the hearts of lepers in a country on the other side of the world.  However, God knew what telling my story would do in a Myanmar Leprosy Hospital.  He would touch hearts and make a lasting connection between them and an old American hemophiliac. God is the best story teller ever, if you say “yes” and let Him speak.