I asked LFM’s long time friend Chin Chin to write a little bit about Christmas in Myanmar. To help you understand some of the context of things she is writing about I need to explain some cultural norms, recent political changes, and my own observations about the people of Myanmar. The freedom to congregate openly is a new phenomenon in Myanmar. Openly congregating together, especially of young people or religious movements, was frowned upon by the previous government regime. It is not surprising that out of a fear of loss of power and control, laws were made to make meeting openly a serious crime. This is why the meeting of 70,000 Myanmar citizens at the Shwedagon Pagoda for the MTV Exit/ Walk Free concert last year holds such significance. Never before would so many people have been allowed to meet all together for any reason. Chin Chin uses the word ‘crusade’, which sounds funny in our American ears. What she means is the ability to congregate and share the gospel (or anything) in public. (Chin Christians in Myanmar commonly call this crusading; it doesn’t have the same connotative meaning it holds in English). Notably, to my knowledge passing out any ‘propaganda’ (IE pamphlets or handouts) is still illegal. You must make your face time count, you can not rely on a micro encounter to hand a passerby information about your church or your group or where you meet regularly. Even if you could do this, previous fears of military threat would dictate a hesitance to have anything in print that would lead to your church. In Myanmar, if you were to visit, it would seem like the whole country was alive in song. The people love to sing.  It is no surprise that this ‘Christmas crusading’ often takes the form of door-to-door caroling. Young people often go out at night with a guitar and a lot of laughter and walk the streets singing for their neighbors, sharing the story of Christ in song. It is almost always well received, with people waiting at their doors or in their yards for their chance to hear the songs. Sometimes they even sing along! Chin Chin makes some insightful observations about her country and some that maybe even we here in America could take to heart. Enjoy!

The, Christmas season, which brings peace and joy, is coming back again with a winter breeze to Myanmar. Although everyone does not know the full meaning of Christmas, believers rejoice in this time. Myanmar is one of the developing countries in Asia and different colors and beauty of Christmas traditions are being introduced to the country. Outwardly, colors and ways of celebrating Christmas can be realized. But, there is still a crucial inward need of informing the history and the real essence of The Christmas Story to the citizens of Myanmar.

In the last two years, we have all noticed the introduction of Christmas decorations imported to the Supermarkets, adorning city buildings and in some families’ houses. As soon as out-door crusades (meeting together) was allowed by the government, believers also began to feel brave and celebrate the Christmas holiday (Sweet December in Myanmar) as an opportunity to get outside and talking about the real meaning of Christmas through song and laughter.

If we could all focus on spending our precious time with family and friends through giving meaningful presents and making fellowship with each other, singing carol songs and sharing the Good News in this Christmas season, the essence of Christmas will be brought to a fuller purpose inside Myanmar.

Let the peace, joy, and blessings of Christmas be with you all from now to forever. 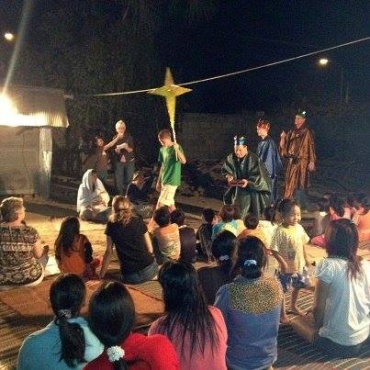 Would you go to prison for sharing the Gospel this Christmas?