The sky is bright yet overcast. A large hill or a small mountain rises just above the palm trees and other tropical trees in the background. Just below the trees rest several houses, spread out amongst the trees.  All of the dwellings have thatched roofing except for one with aluminum roofing.  In front of the houses lies a lush green clearing with short grass and a few bare muddy patches.  The focus on the picture is on a group of men running from different directions toward a central location.  Consisting of dark tan skinned natives and white foreigners, the group of about eight men have their backs turned to the camera.  Another eight men are spread out behind the central group facing the camera.  The muddy bare feet are clearly visible on all except two natives sporting soccer cleats.  All are wearing shorts, some athletic, some cargo.  One native has donned a long sleeved shirt while everybody else is wearing a variety of different colored short sleeved shirts.   Feet flying out from underneath him, one foreigner slips on the slick mud. 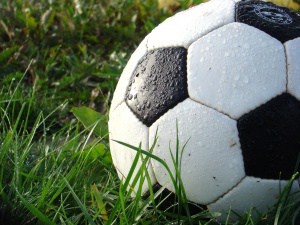 What is not seen is the soccer ball toward which everyone, foreigners and natives alike, is running.  The location is Thaton, Myanmar.  The foreigners belong to a Christian organization called Love for Myanmar whose vision is to bring an English Second Language program to poor villages.

Because this was the first meeting between Love for Myanmar and these particular natives, the Buddhist natives were timid and wary.  On first approach, the natives were very reserved and watched and listened more than they participated.  Gradually, however, with some urging, the women and children opened up to us and allowed us to be not just foreigners but friends.  Being far more wary, the men were slower in opening up to us.  Traditionally, the men lead the villages and, as leaders, wish to avoid mistakes.    Because we were a foreign organization, the leaders feared that we may break down their traditions or beliefs.  They were unsure as to whether or not they should trust us.

Our organization’s purpose is to provide free ESL classes to any who would attend.  Myanmar had begun to dramatically become more westernized.  With western countries moving in and creating jobs, knowing the English language would drastically improve one’s chances of getting a job.  These jobs would completely change their economic circumstances, which is a simple lifestyle barely above subsistence.  Not realizing this, the men were skeptical of our program and organization.  The soccer game broke all previous barriers.  By the end of the game, all of the men were smiling and enjoying themselves.  Talking to each other in spite of a language barrier, we understood each other perfectly through gestures and facial expressions.

Since this game, I have organized and played other soccer games with friends, but none were more enjoyable or memorable as this one game with people whom I had barely known for a few hours.  Whenever I see this picture I remember the great time we had running, slipping, and playing together.  Some may think that playing sports is silly or is a waste of valuable time, but that soccer game is what broke the barrier between us.  Through all our differences, we formed a bond through one common interest: soccer.