The Power of Prayer

I’m currently in Myanmar enjoying meeting old friends, training people how to follow Jesus, and ministering to the orphans and other less fortunate people we support. Things certainly have changed a lot over the years.

When we first landed at the airport in Yangon in 2003, things looked bleak for this lovely country. So many dreadful things had happened in their past and the people yearned for a better future. Christians told us stories of pastors being crucified by the Junta for their faith. Believers endured beatings in jail for years and were released after they had slowly lost their mental faculties.

Myanmar was a broken country with old cars, old buildings, and an old dictator who suppressed freedom and stripped the people of their dignity. Everything was again the law in the land of a thousand golden pagodas. Multitudes died from starvation when the price of rice rose ten cents a pound.

Much like the people of Israel in Egypt, the people continually cried out to their god for deliverance. But Buddha never answered. The more the people endured, the larger and more elaborate their pagodas became. Hoping that somehow their sacrifice of gold and chanting would stop their suffering. It did not.

Things were going from bad to worse, something Holli and I could see with our own eyes. God burdened my heart to figure out the best way to reach the Buddhist people with the gospel of Jesus Christ – the genuine answer to their dilemma. I began to ask other people in the country how they were ministering to their neighbors and sharing the good news. We had many conversations which helped me see what was working and what was not. My lack of language seemed an insurmountable obstacle.

One surprise we encountered after we settled in Yangon was how the Myanmar Baptist Convention distanced themselves from believers from America who had come to share the love of Jesus with Myanmar. We had thought they would be allies, but quickly found them unsupportive of our efforts. At the time, we decided the reason for their skepticism was because of all that they had been through under the military regime.

Amid much spiritual oppression, Holli began to pray every day for a breakthrough in Myanmar. She believed in what we were doing and knew God was with us. She claimed promises from God’s word and shared them with others. Quiet, yet strong, her faith began to weave itself into the hearts and souls of our Buddhist friends. As we faced intense spiritual warfare, I never doubted for a second that she was by my side and we were going to see God’s kingdom come in Myanmar together.

Next time, I’ll share with you how Holli and I knew that God had called us to move to Myanmar and share the Good News. It was one of the toughest decisions we ever made together… 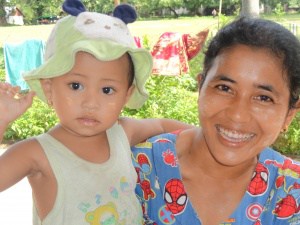 P.S. Please consider giving a one-time or monthly gift to the Holli Lancaster Memorial Missions Fund. Your gift will continue her legacy among the Myanmar people and help us raise up disciples, leaders, groups, and churches throughout Myanmar. CLICK HERE to give and thank you so much.