The Problem with Karma

I remember when we first got to Myanmar in 2003. It was a different country back then – karma had made it a country that time had forgotten.

The government was not open to outside influences and exercised punishing control of its people. Myanmar at that time had one of the largest standing armies in the world – mainly employed to keep their own citizens in submission. The government had a “black list” of those it would not permit to return to Myanmar if they were deemed dangerous to national unity. We were never sure if we would be let back in after our visa runs.

The result of closing their doors to the world were everywhere. Old cars, broken down buildings, an economy on the brink of collapse, government cronies raiding precious resources, and Christians openly persecuted and jailed. A land of contrasts – it was common to see a mansion as you walked down the street and a shanty village next door with an open sewer. 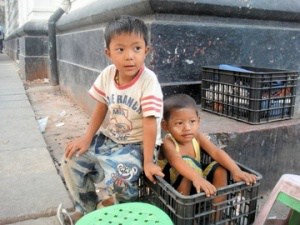 The problem Buddhists faced in this situation was karma. Karma teaches you are being rewarded now for what you have done in the past. The end result of this belief is that the rich get richer and the poor get poorer. The powerful get more powerful and the oppressed become more oppressed. Government officials receive lavish funerals, while common people are buried in shallow graves in the jungle.

In a country closed off to the national community, human rights abuses abounded. The dictator’s daughter received a 75 million dollar necklace as a wedding present — while the average laborer made 30 dollars a month. A twenty-year-old beat up Toyota van cost $30,000 while a two-year-old Lexus cost $4,000 – because you couldn’t get parts or repairs for a Lexus.

So, those who ran the country found themselves in a difficult place. Power and money were the signs of good karma, so to relinquish them was to lose status economically and spiritually. All the while, the population endured the situation, hoping they were earning a better life for themselves in their next go around.

While Myanmar believers doing their best to live for Jesus in such a difficult situation, Holli and I were packing up the family to go into Myanmar, teach English, and share the love of God with the most beautiful, kind people we had ever known.