Which Path is Right?

Everyone has some type of belief about how they can live a better life now, in the future, and for eternity. In Myanmar, the majority culture holds that the teachings of Buddha are the key to a fulfilling and satisfying life. One saying our family heard over and over again when we lived in Myanmar was “to be Burmese is to be Buddhist.” Needless to say, this made sharing Jesus feel like an uphill battle.

The Buddha, however, taught that people should study and learn from other religions. It was healthy to entertain alternatives and make sure one’s beliefs were firm and correct. We invited Buddhists friends into our home and bible studies to find out more about Jesus. Some were interested in hearing more about Jesus – the head of a religion very much different from their own.

What happened next is interesting. Seekers would learn about Jesus and His teachings. Many of them would start to worship Jesus and pray to Him during a crisis. It seemed that they had decided to become Christ-followers. But then the question of baptism would surface.

Parents, friends, and local leaders didn’t mind Buddhist people attending house churches, bible studies, or worship events. They didn’t mind them studying the Bible or praying to Jesus. Families might even discuss the new beliefs of one of their members and find them interesting. If that person wanted to be baptized, however, they faced open hostility and persecution.

Baptism, for those in a Buddhist culture, represented denouncing Buddhism and embracing Christianity. You were choosing one Master and leaving another. Baptism was a point of no return.

What we saw, as a result, were scores of seekers who began to slip back into Buddhism and slowly turn their back on Jesus. The peer pressure and persecution were too intense. The initial excitement over following Jesus waned and they decided to go back to Buddhism.

Baptism, of course, does not save a person. But even non-believers know it represents a spiritual marker in one’s life. Please join us in praying for new believers in Myanmar who face this difficult decision. Pray that God will give them the strength to withstand so many forces trying to pull them back into darkness. 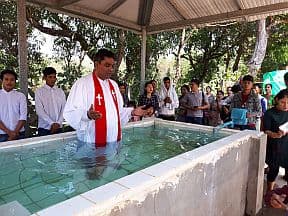